Life has thrown so many curve balls at Allie Coetzee, but he has not lost his spirit in any of these challenges!

He was amputated 2 years ago, above the knee, which for an older person is a huge set back in life.

I met Allie last year August and he hardly had enough strength to stand long enough for my team to take measurements.

We had several fittings to get him comfortable and stable enough to walk.

Just as things got better, he had to undergo surgery to remove a neuroma and bony overgrowth on his femur. That was a setback again, and it took him 6 weeks to recover.

He started walking again and then got a bad allergic reaction from his blood pressure medication.

I saw him early January again, and had to do a refit, as his residual limb had lost a lot of volume!

Allie is now happy man, who can walk with a cane and live a more independent life. 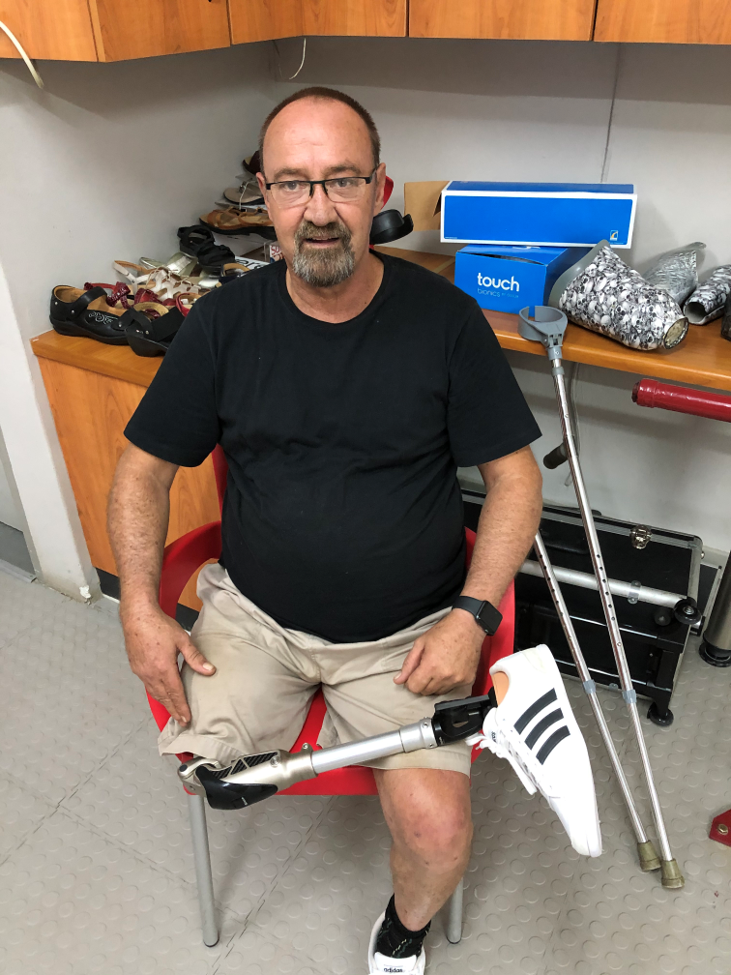 Every so often Allie came to the point where he wanted to quit and buy a wheelchair; but today his positive spirit and attitude has pushed him through to where he is now.

We will supply his final prosthesis later this week!

Lucia Van Heerden is many things, she is a ballerina, a below-knee amputee, an Össur...

Tlotitso is 3 years old, turning 4 in September. He was born with a under developed leg and his foot was turned...

Allis Steyn is an absolute inspiration to any elderly person who has suffered limb loss. A year ago, she struggled...

Divan is a 16 year old boy, who had a traumatic below knee amputation, due to a motor cycle accident. We met with...

Piet Dreyer only accepts the best when it comes to friends and prosthetists, so naturally he chose Jaco Deist to act...

Life is not always fair and sometimes challenges you in ways you simply don’t know how to manage. However, people...

David Bouwer is our rough diamond. He is a very positive person and has continued with his fast and fearless life,...

Rethabile Machete is a happy three-year-old girl who was born with a congenital birth defect....

Meeting someone before a selective amputation, where the person must make a decision to amputate a leg or not, is...

A story like the story of Henry Mdluvu, is not just a success story, but a story of courage and determination!

Nelisiwe Thsabalala received her Above Knee Prosthesis today! She was so desperate to look beautiful again, and to...

Stefan Broodryk is our resident cool guy sporting tattoos and a funky, colourful prosthesis! Stefan has been with...

Lise Brink was in a car accident 2 years ago and they gad to amputate her left leg above the knee. Lise had a very...

Our patient, Georg Gremels, had his left leg amputated on the 29th of January. While in theatre, we fitted him with...

Mrs Barnard, one of our oldest patients, was recently supplied with a prosthetic limb. She was 91 years old when she...

Mr Govender and his family came to my offices to discuss his options as a below-knee amputee. Over a year ago, Mr...

Jayden Brits is a three year old boy who lost one of his limbs due to Amnion Band Constriction Syndrome. As an...

Life has thrown so many curve balls at Allie Coetzee, but he has not lost his spirit in any of these challenges! ...

Toppie Gray lost his leg above-the-knee and was left with a short residual limb with a very short femur at the end...

Life is full of lessons and surprises. In our profession we often come across very inspiring people- some old and...

Bridgette Mokoena, a partial-hand amputee, enlisted the expertise of ...

Amputations and prosthetic limbs are usually associated with images of heart break, pain and broken dreams.  But,...

Christopher is an excellent example of why I live for my profession and why my encounters and experiences with...

Prof. Pistorius is a symes amputee. Her residual limb is extremely atrophied; therefore, she has a very thin and...

It’s always incredible to witness the excitement and exuberance of an amputee who has gone through the prosthesis...

Chris Smit had a rough ride, in more way than one. Many years ago he was in a motorcycle accident and he was given a...

Kurt sustained his injury in a motorcycle accident in 2015 when he was hit by a car that skipped a red light. The...

Callan and I met back in 2017 after his hand was severely burnt in a work-related accident. This accident took away...

David lost his leg in an accident when he was only three years old and has spent the last eighteen years walking on...

“Aging is not lost youth, but a new stage of opportunity and strength.” – Betty Friedan

Singizile has been a patient of Jaco Deist and his team since infancy. She and her family are wonderful people who...

Petrus Mnisi is a transfemoral amputee and has been for many years. Over the time that has elapsed since his...

I have written so many “success” stories that includes children, and every time one experience the same feelings of...

Happy New Year to all and I hope that 2014 is a fantastic year for you!

Imtiaz Ismail came to Deist & Associates only a few months ago, but it was far from his first visit to a...

Jaco here. At the end of last year (2020), I encountered the most courageous woman I...